Taylor Swift brought the bright and bold RED tour to close out 2013 at Melbourne’s Etihad Stadium and showed why she hits pretty much every music demographic available in a spectacular stadium show.

It’s nearly 11pm, and two 7 year olds are wide awake, scurrying along the Etihad Stadium floor furiously collecting as much heart shaped tissue paper confetti as they can fit into their Red Tour emblazoned merchandise bags. But this story starts about 4 hours earlier, on a crowded walkway usually overflowing with football fans.

To say Swift’s sole demographic is the young female tween doesn’t even start to tell the story. In fact, what ‘s evident on the walk towards the monolithic West Melbourne stadium is that Taylor doesn’t seem to have a demographic. There are kids under ten (two of them accompanying yours truly), plenty of Mums and Dads to accompany them, there are teenage boys and girls, mid 20s Girls’ Night Outs, and plenty of 20 to 30 year old guys – not of the ‘reluctant boyfriend’ variety.

Simply put, you don’t sell out 50,000 seat stadiums – the first solo female artist to do so in Melbourne since Madonna’s last tour in 1993 – without a cross section of fans.

Australian Idol’s first season winner Guy Sebastian is handed the task of warming up the half full crowd ahead of Ms Swift’s arrival. As one of the very few success stories from the talent show, Sebastian shows that he’s got the live chops and voice to carry it off, and both he and the enthusiastic crowd seem to take as much out of the performance as each other. What always confounds about an artist like Guy Sebastian is that whilst his live voice proves that he is a genuine singer moreso than pop star, his radio fodder is so treated and manipulated that it sounds like it’s come directly from a macbook pro. Guy, you can sing. Make sure your producers know that and resist the need to remove any human traces from your recorded work.

After the energetic almost hour long set concludes, fans in costumes holding banners and wearing a large amount of their mothers’ make up drawers jostle for position by the railing. Thankfully, with a seat already up against the fence, our vantage point never comes under threat and as the Red album’s U2-esque opener State of Grace signals the arrival of our heroine, the silhouetted singer behind the red curtain strikes her trademark awkward poses to ear piercing squeals. The curtain drops and Taylor makes her way around the heart shaped stage to widespread adoration. She sounds great and immediately shows that she’s neither intimidated nor dwarfed by the huge stadium in which she finds herself.

Drawing heavily from the hugely successful RED album, there’s an early costume change (of which there will be many) and the title track from the album generates the first big singalong of the evening. Armed with a sparkling red Gibson Les Paul, Taylor strikes rock star poses at the end of the elaborate runway. It’s only a day after her 24th Birthday, and Taylor takes the opportunity to pose with fans as her photographer snaps a pic of the huge Melbourne crowd. Though she’s been touring this show for a year, Swift possesses entertainment gold: the ability to make everyone feel that this is the first time she’s performing.

She seems genuinely energetic, excited, and sincere. There are the at times lengthy and overly inspirational introductions to songs like Mean, but that’s hardly going to surprise any of her fans. For someone whose catalogue is heavily made up with songs about boyfriends she seems to love and loathe equally, Taylor Swift has been able to maintain the wholesome all-american sheen that sees parents not just allowing their kids to go and watch, but heading along themselves to check out what the fuss is all about.

The college clothes and freshman moves of 22 see Taylor carried from the end of the main stage all the way to the back of the stadium, where she sits with only an acoustic guitar and delivers You Belong with Me and Begin Again to a different corner of the crowd. Simply put, she has found ways through the use of both elaborate staging and basic song delivery to reach everyone in the 3 levels of Etihad Stadium.

As she makes her way back to the main stage towards the end of Sparks Fly, she stops to shake and hold the hands of those who’ve managed to find a spot alongside the security rope. There’s a smile across my 7 year old’s face after this, that will even make sitting in the carpark after the show an enjoyable experience. To top it off, she has one of Taylor’s guitar picks to show for it.

The hits continue as the show resumes on the main stage with Trouble, before Taylor takes to the Grand Piano and gives us All Too Well (complete with excessive hair flicks and lengthy introduction). With the stage undergoing a transformation, Taylor gives us the ballad Treacherous as she balances her way across an elevated beam. Her movements are awkward, and at times exaggerated and over-choreographed but to many that’s simply the charm of a self-confessed dork delivering the songs she wrote herself.

On the RED tour, Taylor seems to have found the perfect mix between the sincerity of these songs, and the spectacle of making every seat in the house worth the money paid. Nothing shows this approach off more than the spectacular closer, her  2012 smash We Are Never Getting Back Together. An Alice In Wonderland-esque line up of rabbits, circus types, confetti, glitter, and Taylor herself hovering 30 metres above the crowd on a crane in a sequinned red suit made this an emphatic exclamation mark to close out the short – at 14 songs – show but one that none left disappointed.

After 90 minutes, Taylor Swift had given her adoring crowd the hits they wanted to see, all delivered by someone who played to all corners. There’s been plenty of costume changes but, in stark contrast to artists like Lady Gaga, these never eat into the flow and continuity of the show.

The world’s top grossing tour of 2013 ends the year in Melbourne, but with a pop music star shining as brightly as Taylor Swift’s, it won’t be long before more boyfriends are obtained and dumped for lyrical material. As the tissue paper confetti is cleaned up by both Etihad Stadium staff and 7 year old fans alike, it’s impossible to see how, for 50,000 diverse folk at an austere football stadium, tonight could be anything other than a demographic spanning triumph. 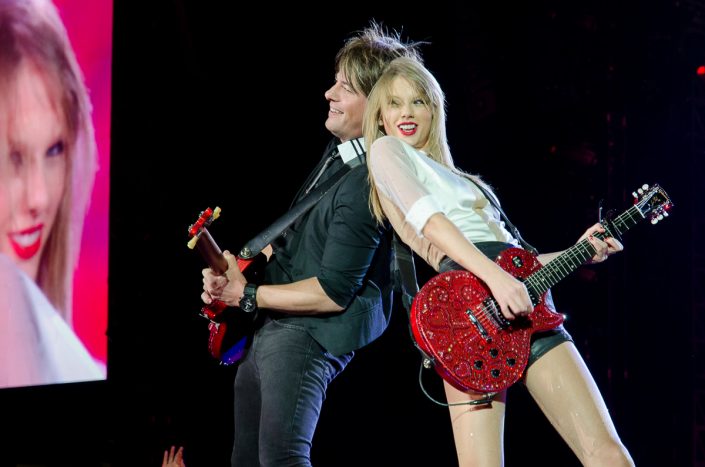 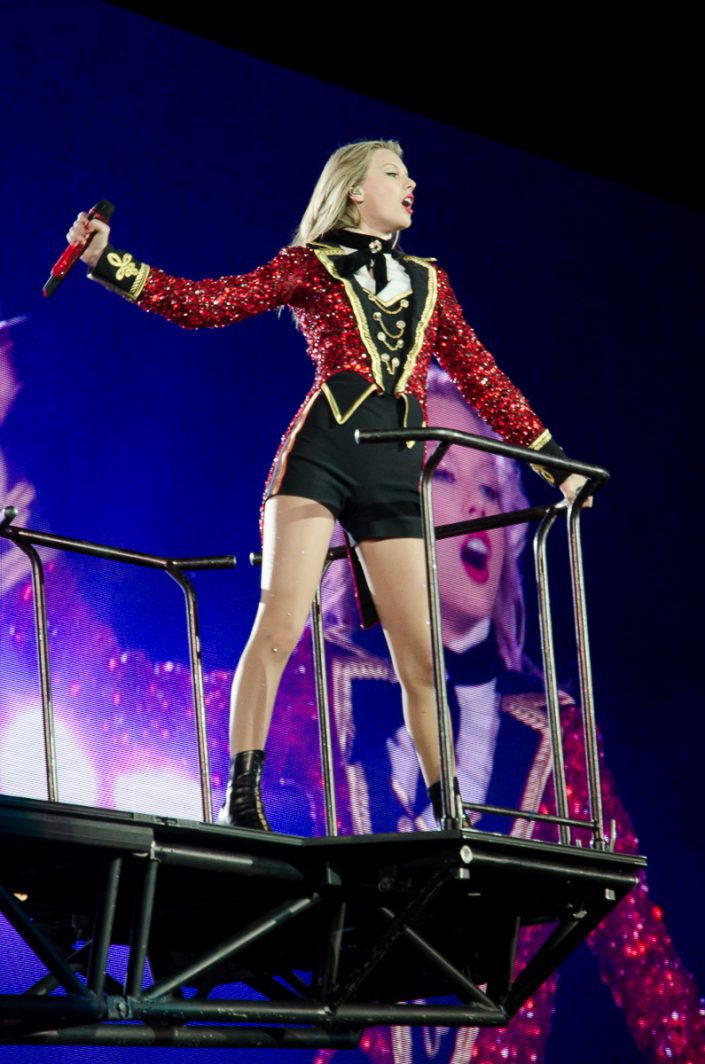 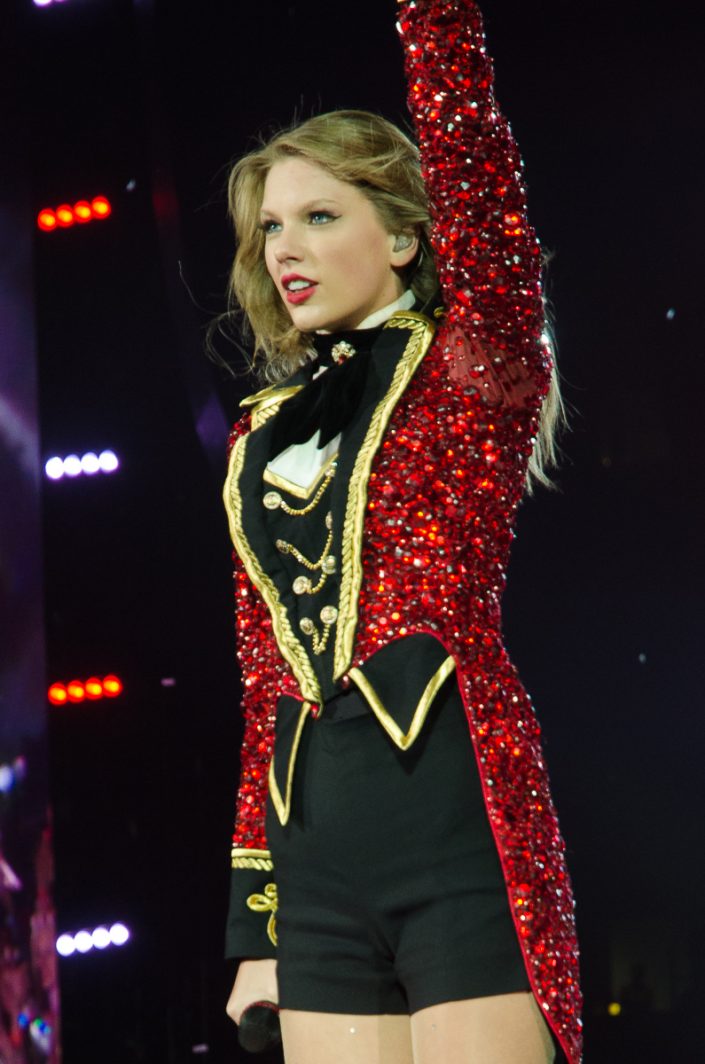 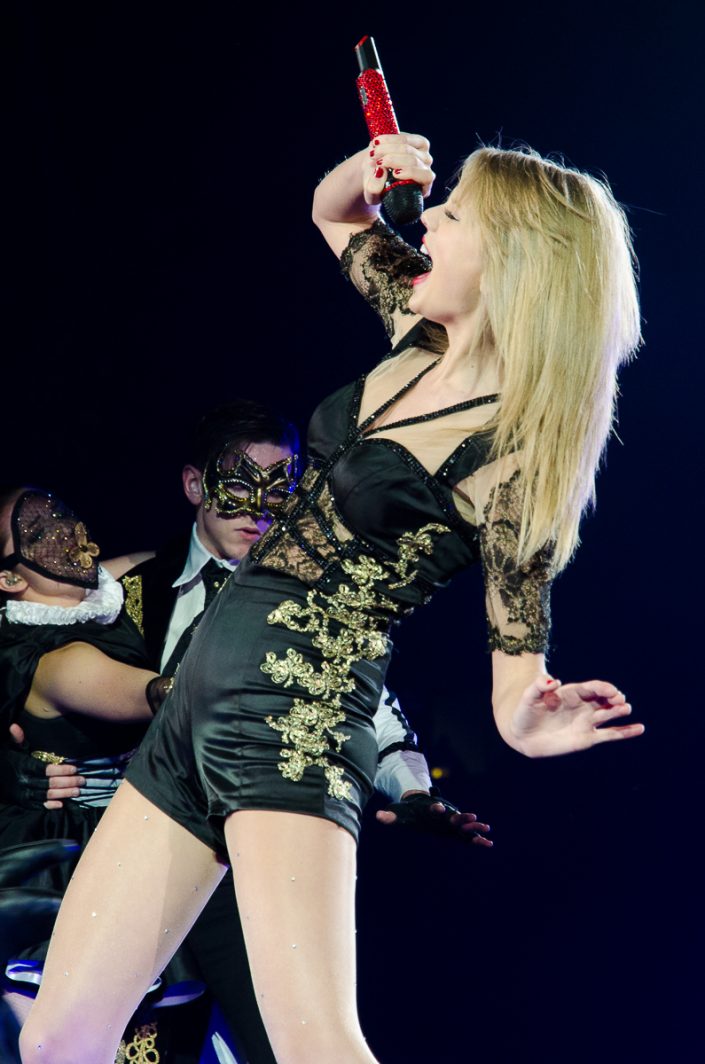 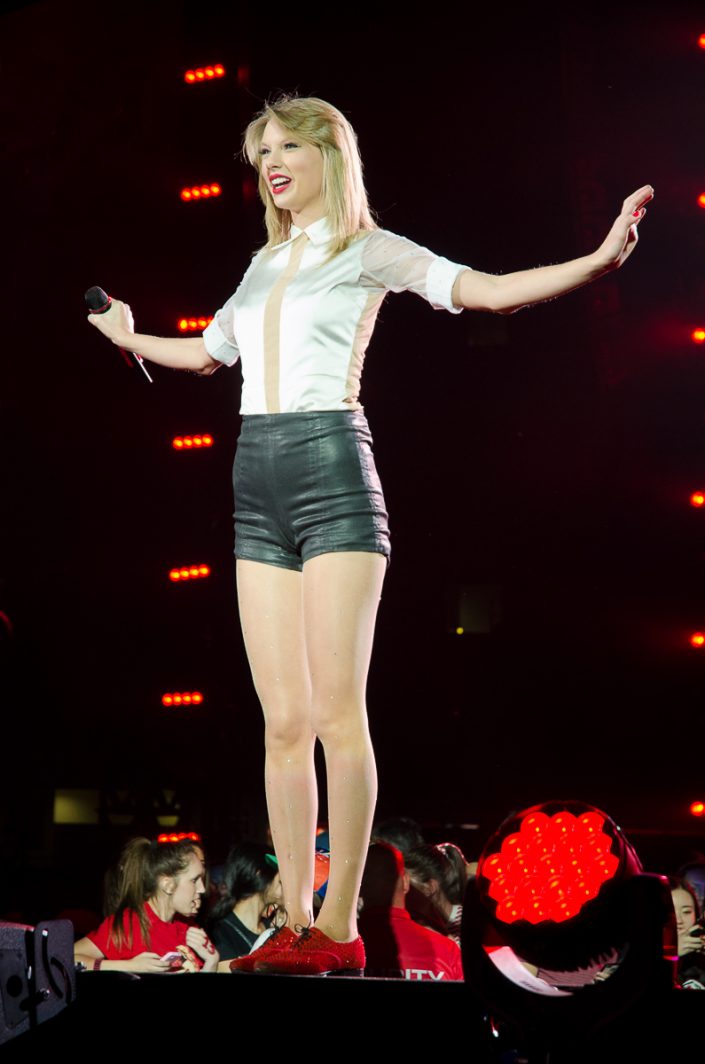 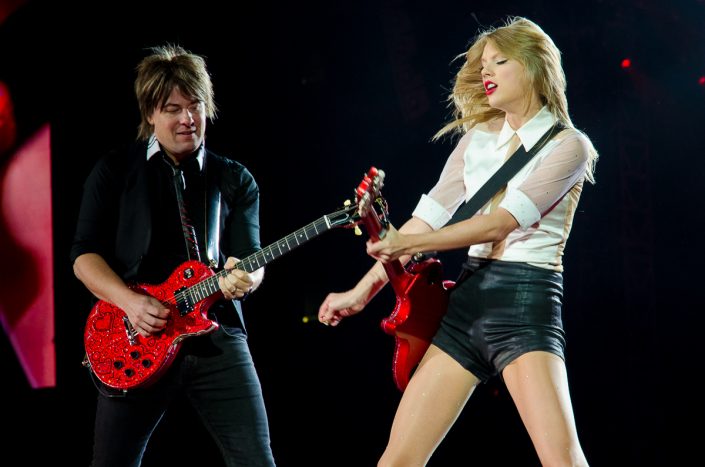 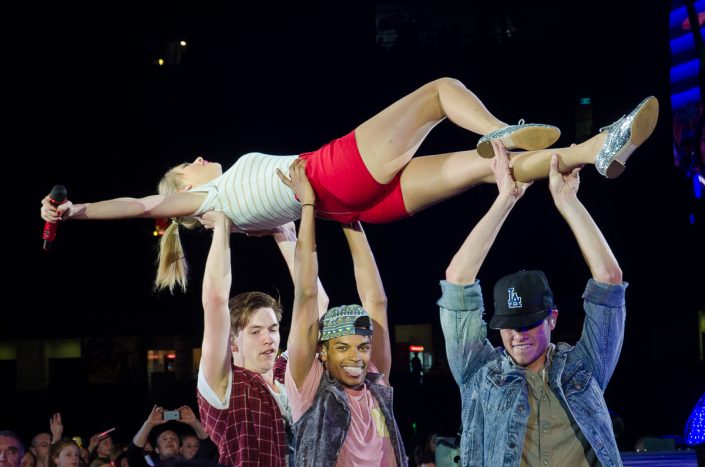 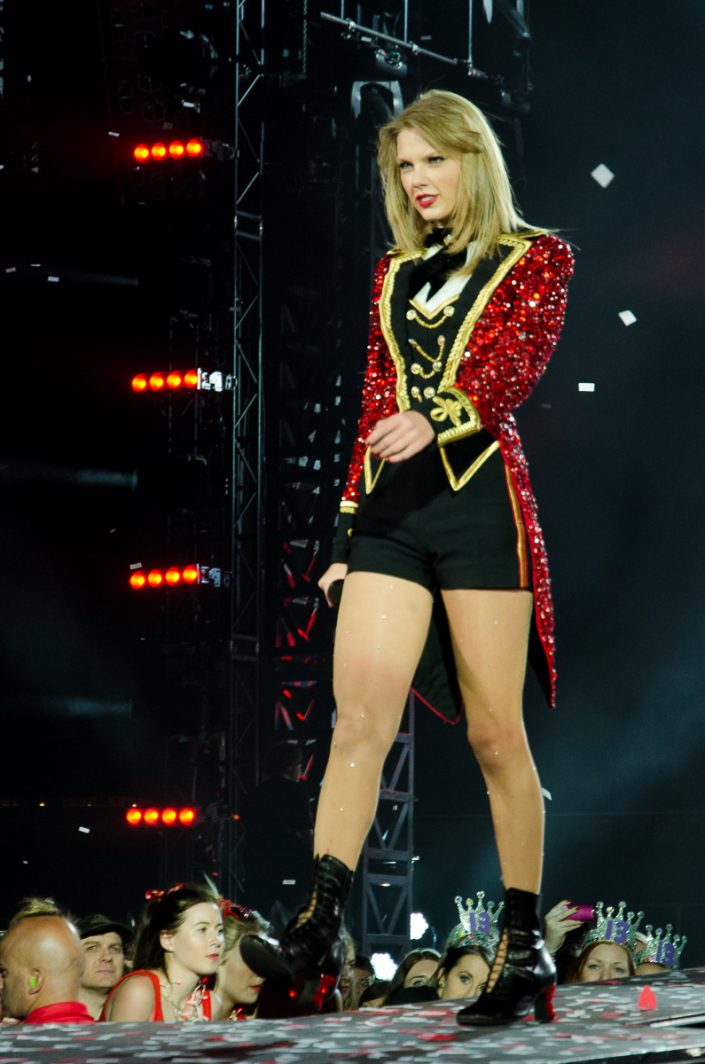 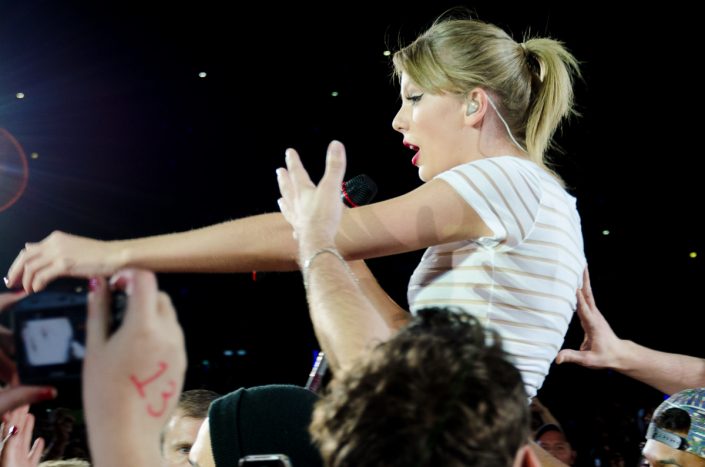 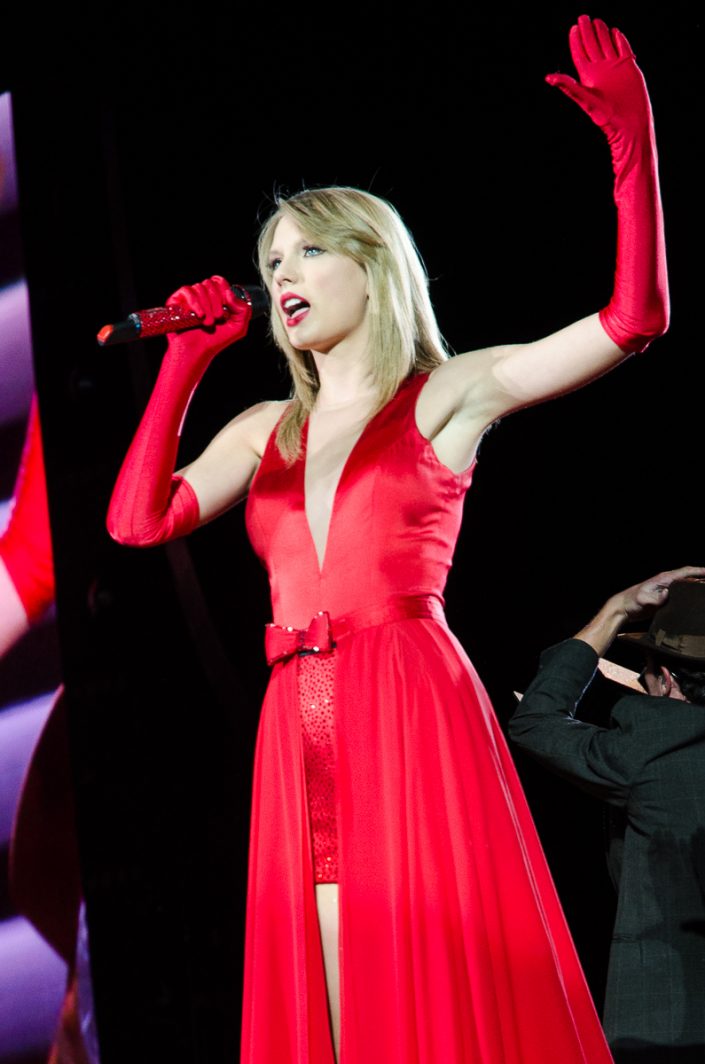 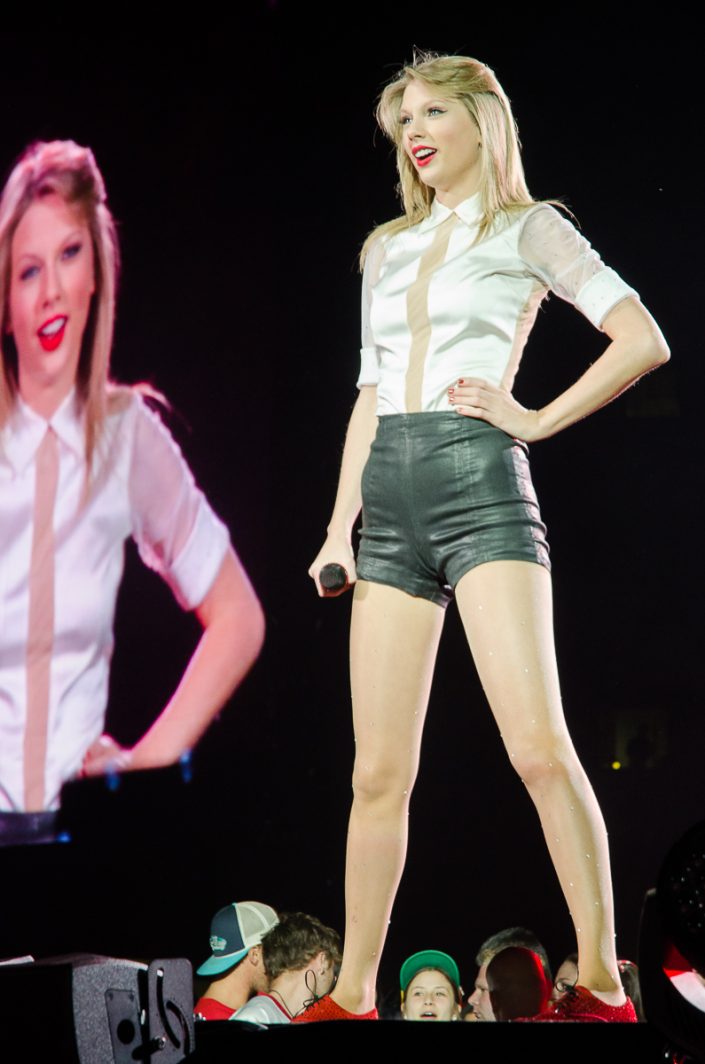 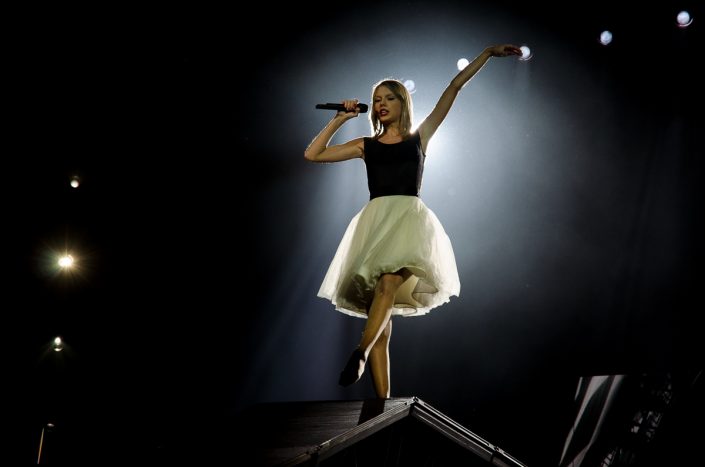 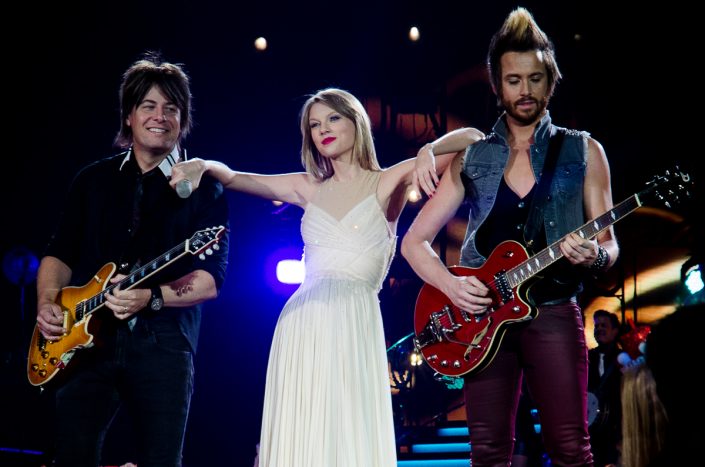 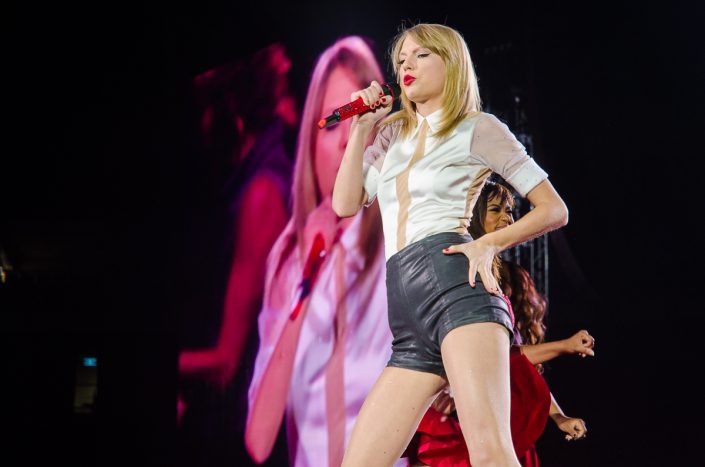 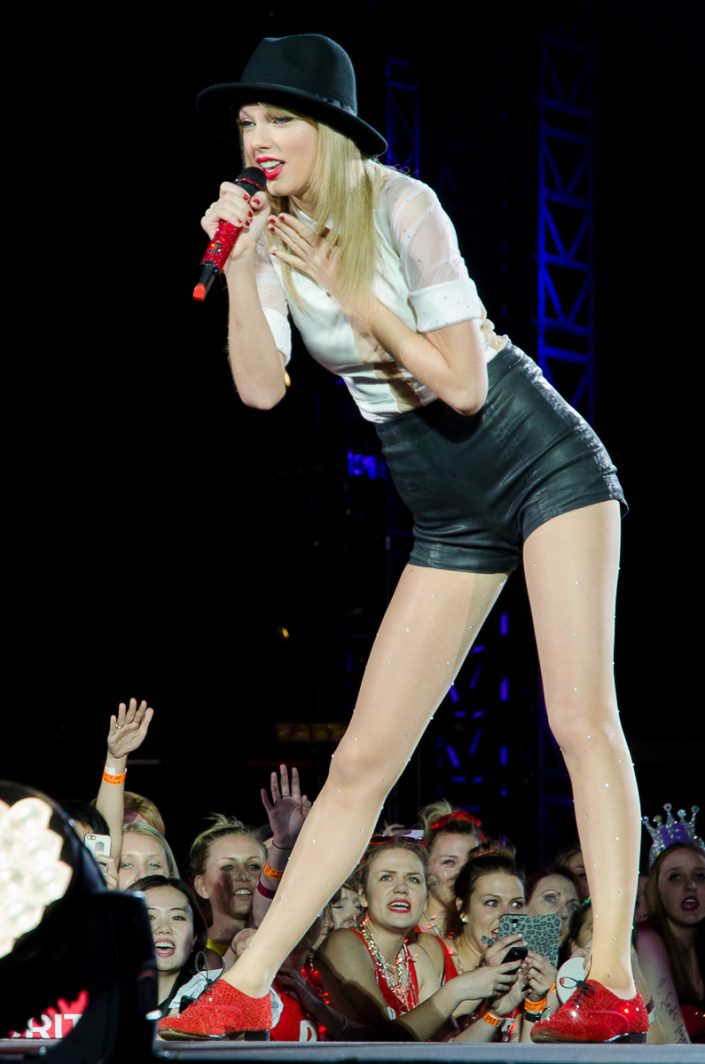 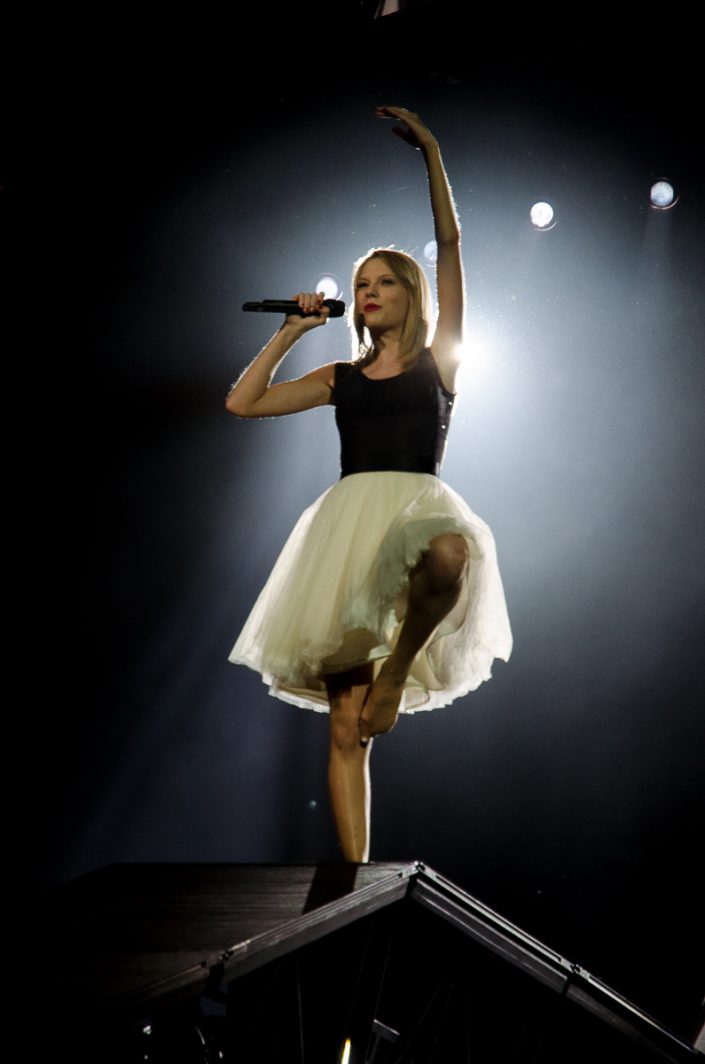 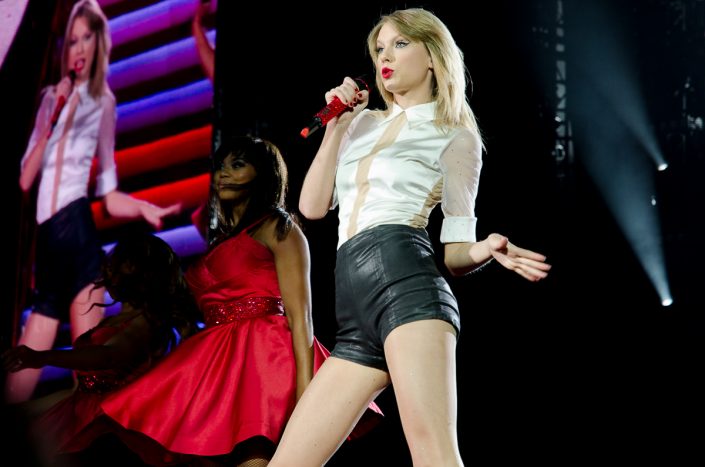 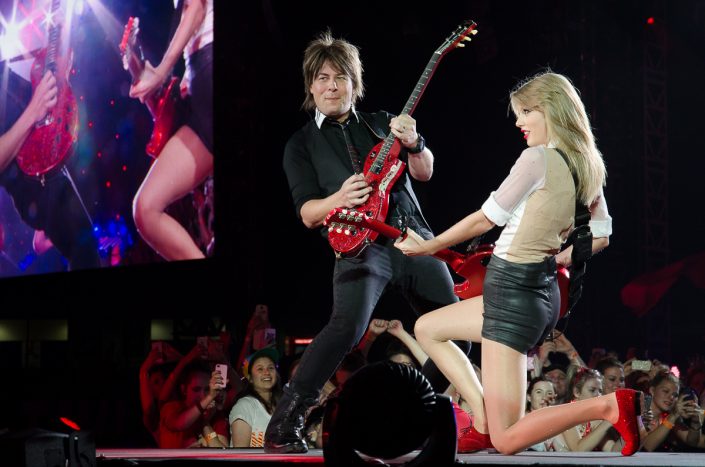 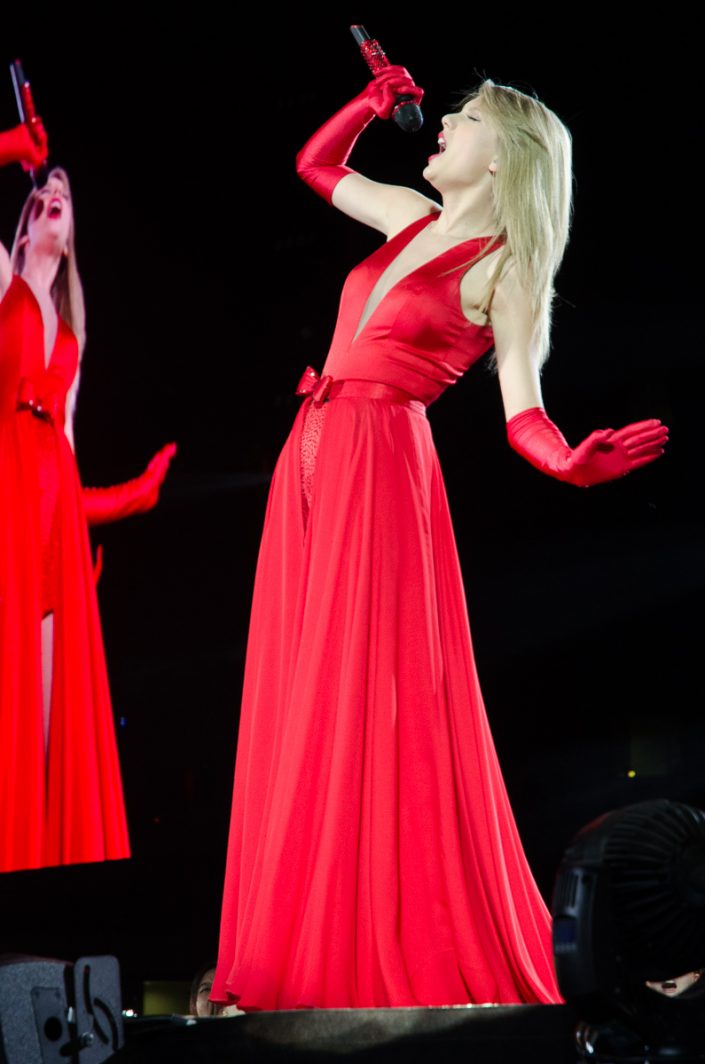 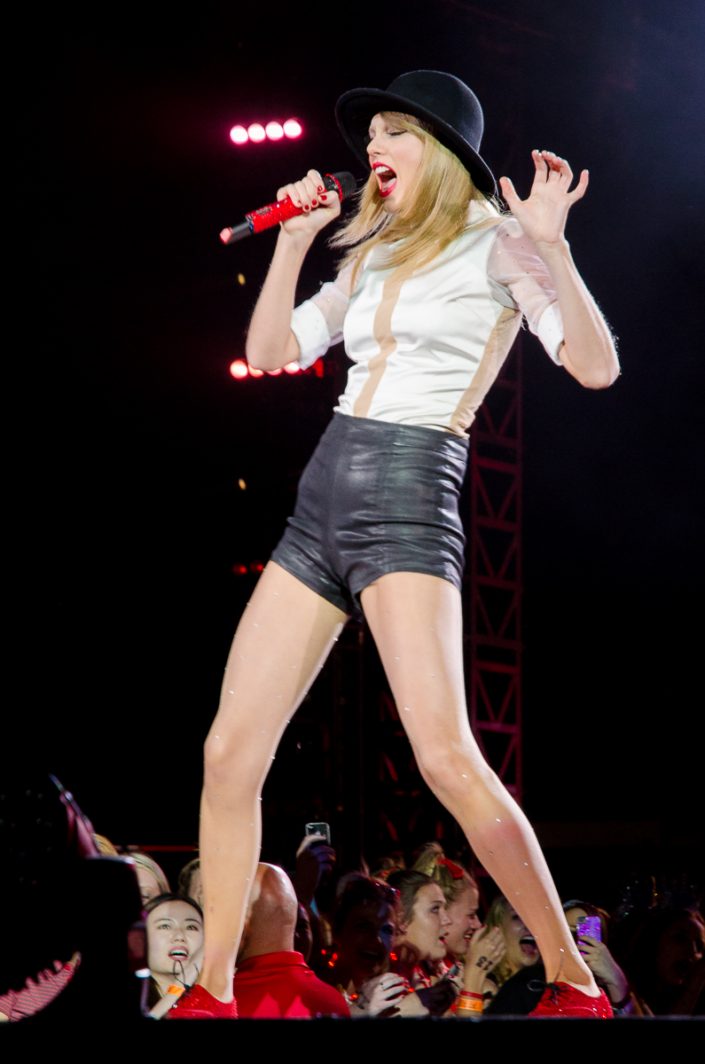 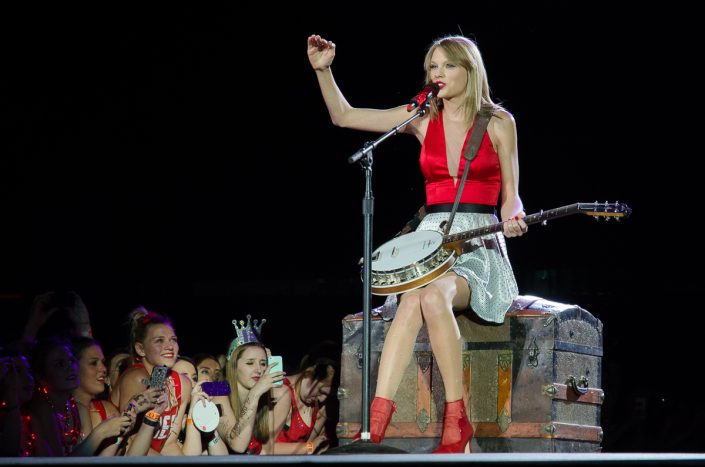 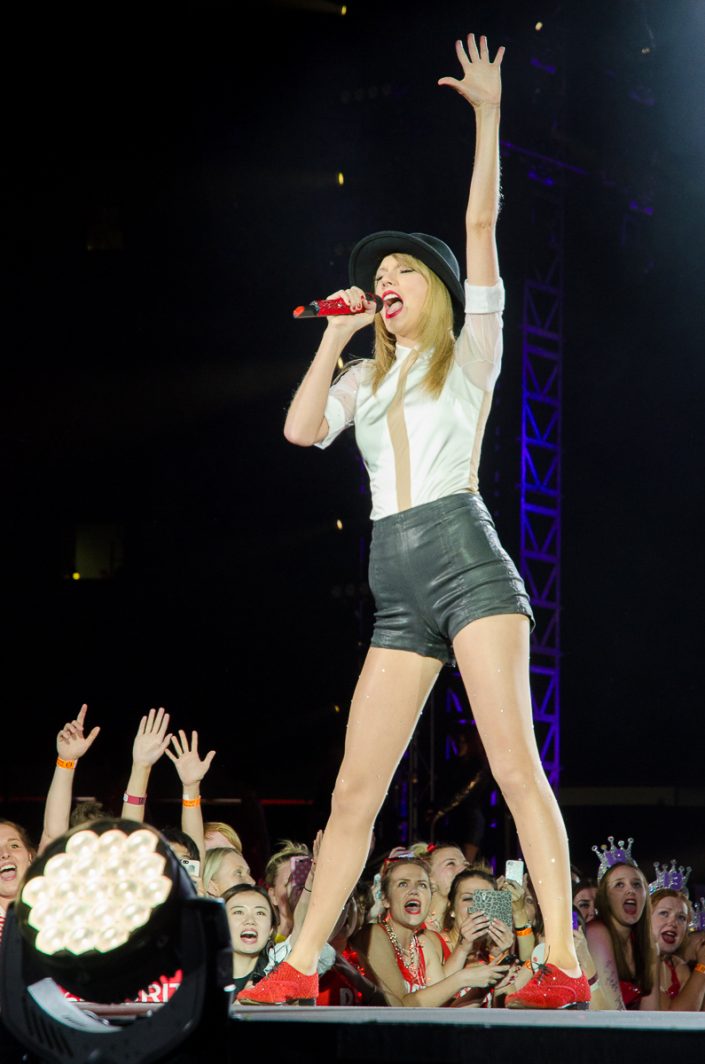 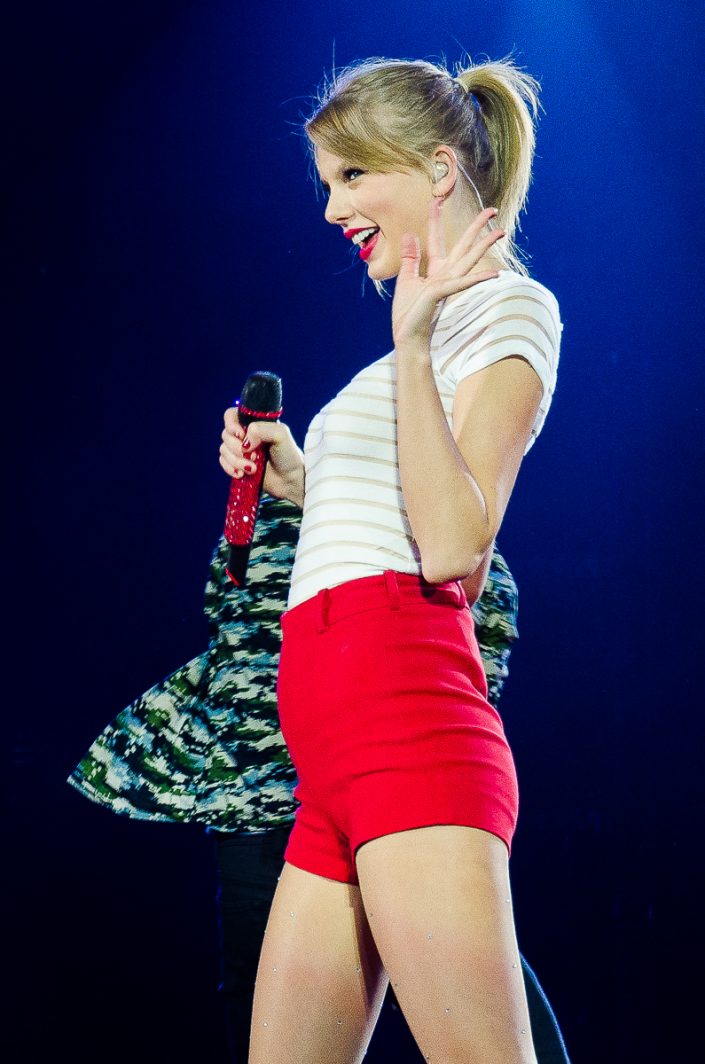