After 18 long years, British legends Blur finally made it back to Australian shores. And it was worth every second of the agonising wait.When a band has delivered one of your all time favourite gigs (Chisholm Hall, November 1st 1997), there’s always going to be some fear. Fear that perhaps, 18 years later, those memories will be brought in to question by a performance from 4 lads now closer to 50 than 30 that doesn’t quite reach the dizzy heights of a drunken Monash University Basketball Court. After thrilling the Splendour crowd with a set tinged slightly by jetlag at Byron Bay 2 days prior, it was time for Blur to play to a crowd that was 100% their own. First though it was up to fellow Londoner Jamie T. to open proceedings at the by now half full Rod Laver Arena. Far from intimidated, he delivered a superb mix of his first three albums to an appreciative audience, with obvious highlights 368, Rabbit Hole and Zombie eliciting the best responses. With a mixture of jangly guitar, rapid fire lyrics, rap and melancholy he kept the predominantly GA crowd (some of whom had queued since mid-afternoon) entertained throughout his 10 song set. Not new to most ears, but not yet a household name, Jamie T. surely had a few people jumping onto various scrupulous and not-so-scrupulous music download sites in the days that followed.

With the lights dimming, a Mr Whippy medley of sorts chimes through, culminating in the tune from current album track Ice Cream Man. Slinking onto the stage, drummer Dave Rowntree, Bassist Alex James (sans cigarette due to Rod Laver’s strict No Smoking policy) and guitarist Graham Coxon take up their positions. Frontman and all round nutcase Damon Albarn then sets about dousing photographers and those in the GA section with bottle after bottle of water before launching into Go Out, the lead single from current album The Magic Whip. His energy is off the charts already, and perhaps unlike their last visit in 1997, it’s down only to sugar. We presume. From the present album back to their first album, 1991’s There’s No Other Way immediately shows it’s not aged a day, with the crowd now heaving as Albarn makes his way from the stage and onto the front rails through a sea of 15 photographers. Tonight already feels like something special and as Coxon stabs the Modern Life is Rubbish-esque guitar lines of The Magic Whip’s Lonesome Street it’s clear that the band are not only keen, but capable of mixing 2015 with their 25 years’ worth of back catalogue.

All the hallmarks of Blur are on show: the 4 distinct personalities of the band members, Alex James’ bouncing and slinking basslines, Rowntree’s cocked head drumming style, Coxon wrestling with dischordant guitar lines and, well Damon out front. With camera checked and seat taken, Badhead and the Style Council-esque Ghost Ship – two new additions to the set when compared to Sunday night – keep things moving at mid tempo. The new album hasn’t quite cut through the whole crowd but the songs are well placed in the set and fit with the story. There’s a local reference from Albarn, letting us know that parts of the album were written in Melbourne (when out here touring solo in 2014), and although many of the songs are rooted in the streets of Kowloon there’s a warm appreciation. He also spots Adam, a fan on the front rail who sports an arm length tattoo of the lads. Sounding genuinely impressed, Albarn passes him the mic and he thanks the band for making his life just that bit better. Ahhhhhhhhhh. But more of him later.

Albarn takes a back seat and lets his guitarist shine, with Coxon’s voice and guitar on Coffee & TV proving an early highlight. The touring backing vocalists fill the space and the song fades nicely into Out of Time from the largely Graham-less album Think Tank. A third of the way into the show, it’s impossible for anyone to level the ‘all your songs sound the same’ criticism at Blur. Complex and varied maybe, but the only real constant is Albarn’s complete enthusiasm for the show. As Coxon hacks at his guitar, 1997’s Beetlebum is upon us and, just as it did when opening their show back at Monash University it has the crowd bellowing “And when she lets me slip away” in all the right places. Alex James’ superb bassline crawls its way through the song and it’s clear we’re witnessing something special.

Three songs in the middle of the set define this gig to these ears, and they’re not the big name tunes you’d expect. 13’s Trimm Trabb creeps its way into the room via Coxon’s circular acoustic riff. Albarn though decides to go for a bit of a walk, leaving the stage and climbing his way up the stairs and railing, surrounded by fans, fists and phones. If tonight is going to fall flat, it’s not going to be through any lack of effort from the front man – indeed no one is in any doubt as to who runs this band, and why it has led such a fractured existence. The message: try to rein in Albarn at your peril. My Terracotta Heart follows, Damon’s apology of sorts to childhood friend Graham Coxon – “when we were more like brothers, but that was years ago”. The way Coxon’s subtle guitar work – bends and mellow scales – play against Albarn’s brutally honest lyrics make this the album’s highlight and an unlikely contender for the highlight of the night. It’s absorbed by the crowd and it’s absence at Splendour, though understandable, was made more conspicuous by its quality tonight.

Singalong time. Tender was a festival highlight, but with 10,000 people belting it out under a roof it still worked, and let’s be honest even if you didn’t know the words at the start of the song, by the end you’ve got a fair idea. It builds, and again the backing singers lift its gospel sound higher than 4 people should be able to. The crowd didn’t take up the spontaneous chorus as they did in Byron Bay, but that didn’t seem to hurt its impact.

A double hit from 1994’s masterpiece Parklife follows – Trouble in the Message Centre is described by Damon as ‘one of our pre-internet songs’. There are people here tonight who weren’t born when that album was released, let alone who would know what a telephone exchange was actually for (“It’s kinda, I dunno, like a Skype kind of thing with wires?”). Damon pogos, douses Rowntree in more and more water, falls over, crashes into things and generally creates all manner of mayhem. Next, it’s back to our friend Adam in the front row as he is summoned on stage along with three others to sing the title track, Parklife. All the people. So many people. The entire crowd are on their feet and whilst Adam is probably having the time of his life, the rest of us aren’t far behind. Sneaking Song 2 in mid set as well is pretty clever… It’s over in less than 2 minutes but it does what it’s supposed to do.

There aren’t a lot of songs out there about North Korea, but even the late Kim Jong-Il might be tempted to belt Pyongyang out in a local karaoke bar. It paints a bleak picture, but of a place often described as fascinating and contradictory. Really glad to hear this one in the set – it’s a brave choice to sprinkle so much of The Magic Whip throughout the show – but it pays off. As good as it is though, it doesn’t quite compare to the 1 – 2 punch of To the End and This is a Low to close out the main set. These two epic tunes from Parklife are up there with Blur’s finest, the aching relationship-just-ended lyrics of To the End, and the shipping radio broadcast travelogue of Albarn’s Britainnia punctuate the night. Thankfully, it’s with a comma, and not a full stop.

Though not their favourite album, 1995’s The Great Escape finally gets an airing, via album opener Stereotypes. “Wife swapping is the future” prescribes Damon, and while it would be nice to hear Mr Robinson’s Quango or He Thought of Cars, Stereotypes does its job beautifully as the lead in to the bouncy brilliance of Girls & Boys. The lights are up, the crowd is jumping, live music doesn’t get much better than this. That is of course until the incredible opening track from Modern Life is Rubbish is thrown into the mix. For Tomorrow shows off the 4 piece horn section beautifully, the band are all smiles and it’s clear this show is going to go right up to the 11pm cut off. As the familiar strings whisper their way into the room, The Universal closes out a perfect night, its soaring refrain finally convincing us that something we never thought could ‘appen – a return to these shores of one of the greatest English bands ever – really really really could. Indeed it did. Even if it never does again, nobody who witnessed tonight’s gig at Rod Laver Arena could complain. 4 guys, approaching 50, delivered nothing short of perfection. 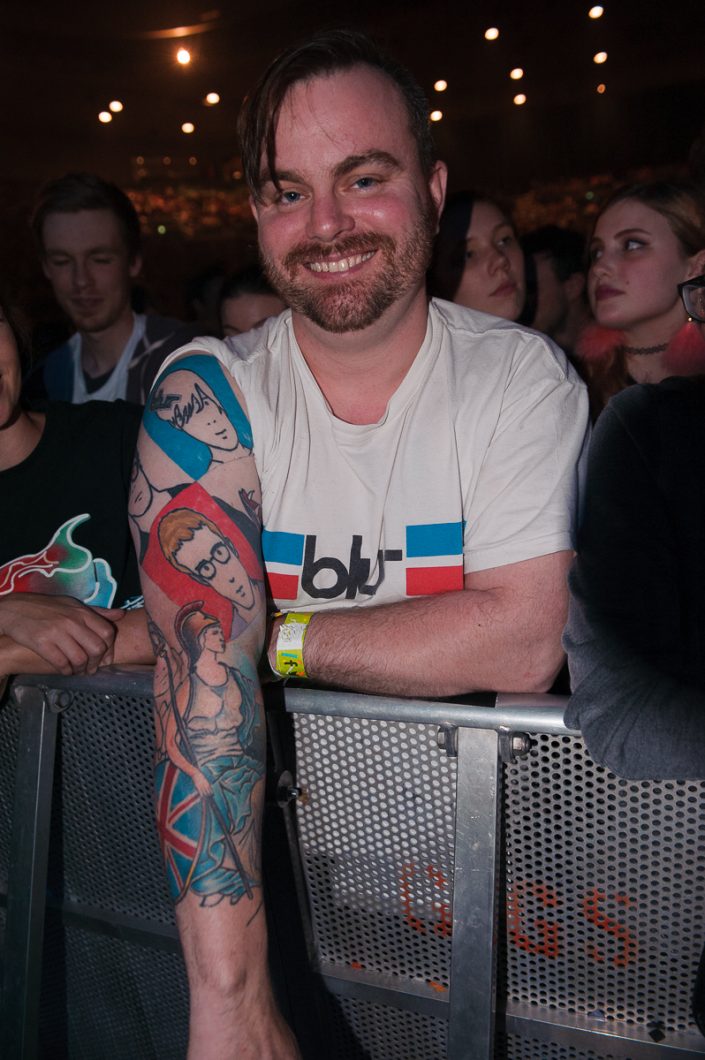 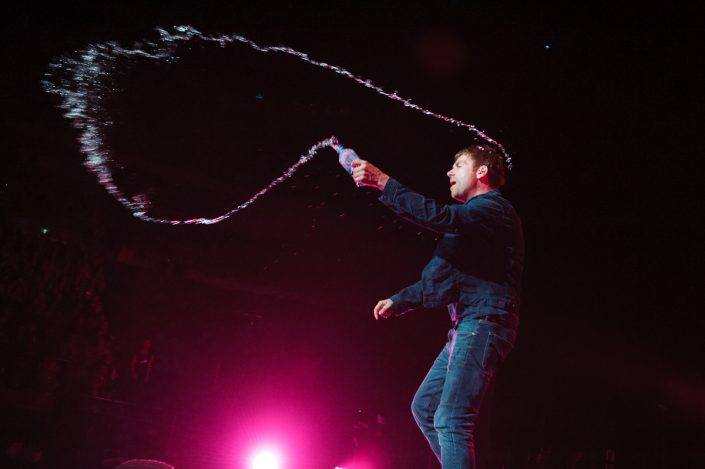 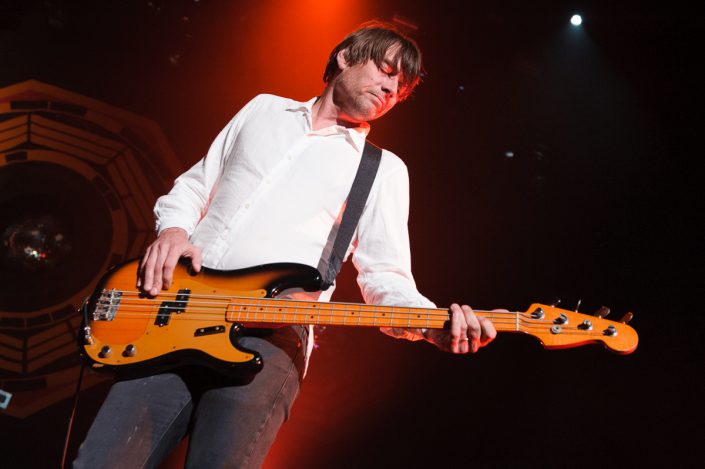 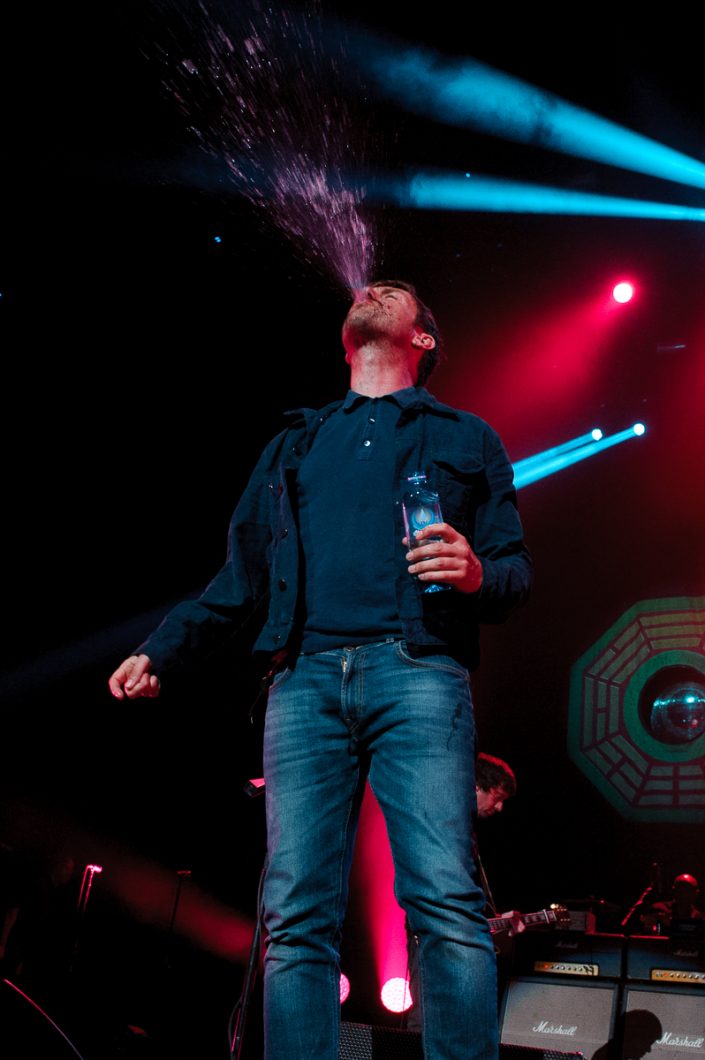 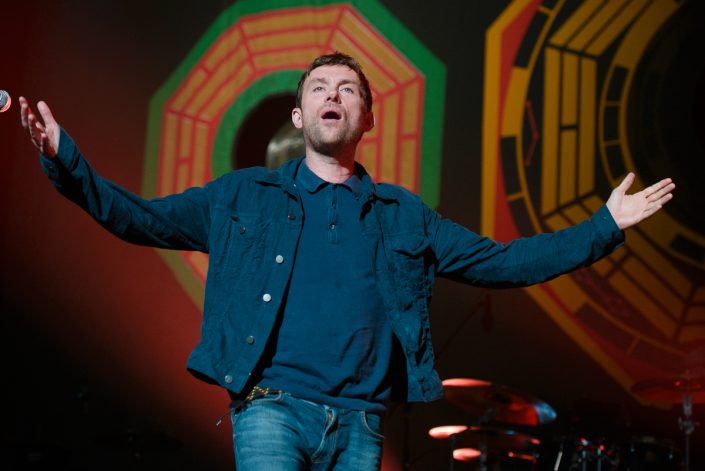 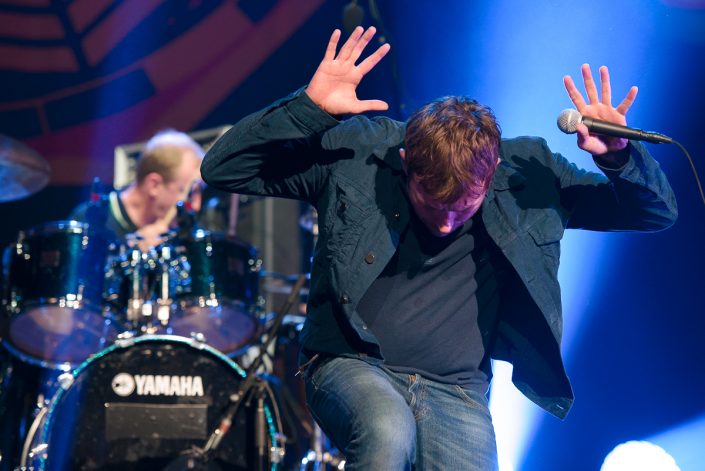 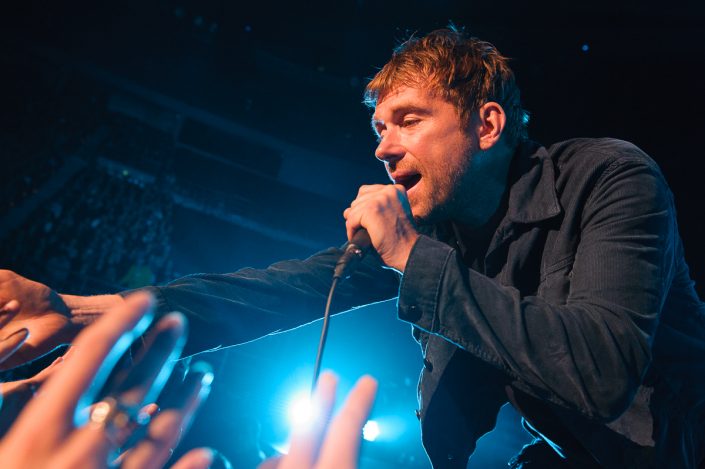 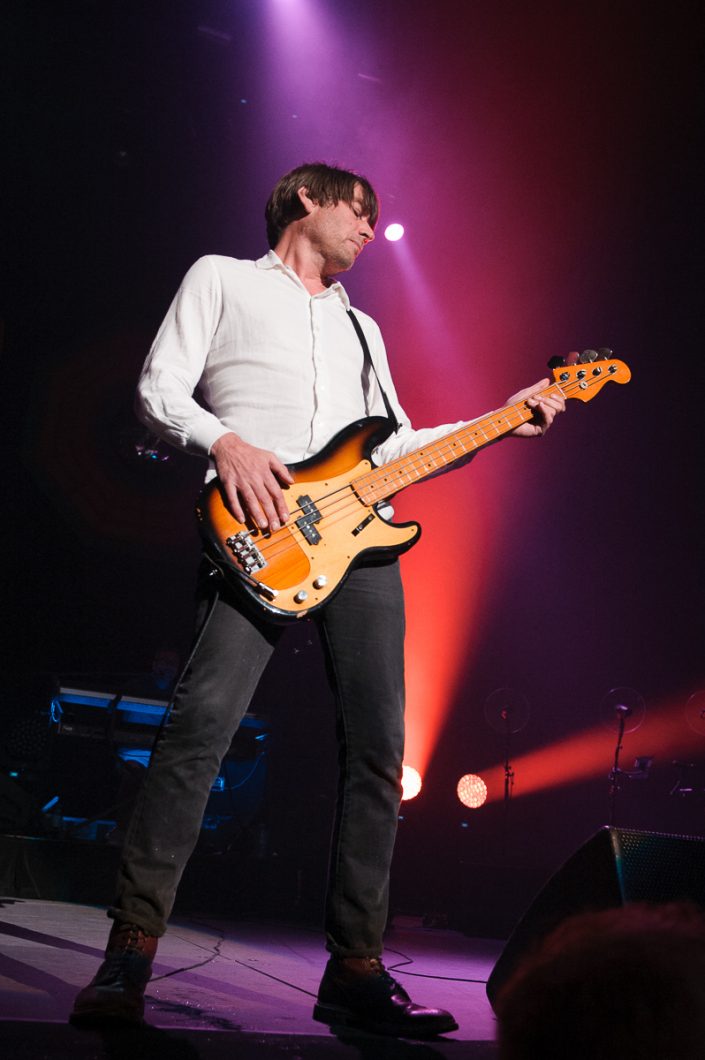 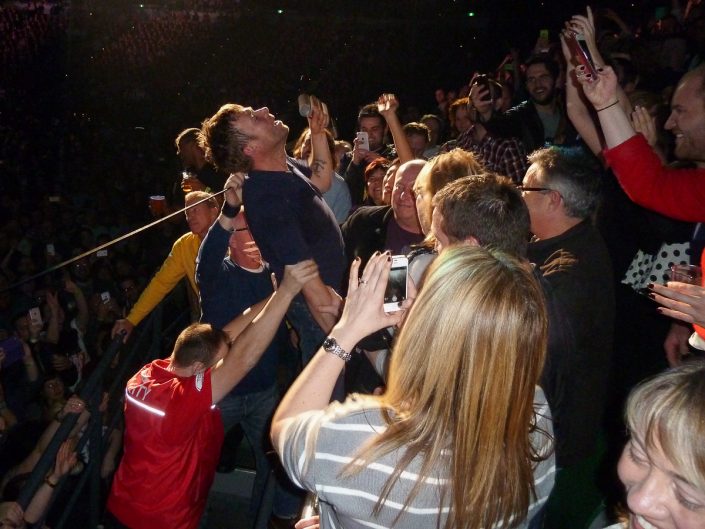